The CMLA Met With The Treasury Department To Discuss GSE Reform 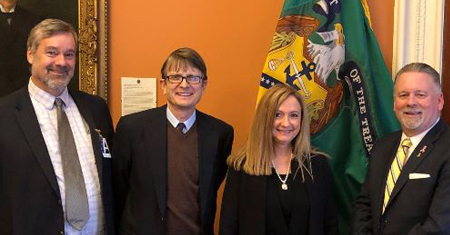 A small group of representatives of the CMLA and CHLA, at the request of the Treasury Department, met to discuss GSE reform and the actions which need to be taken to ensure midsize and small lenders maintain equal access to the secondary markets. In addition, discussions regarding the impacts of any current proposals also took place.

In attendance for the CMLA were Kim Curtis, Board Chair of the CMLA and President and CEO of Tidewater Home Funding, Mike Loftin, Chief Executive Officer of Homewise, a CMLA member, Rob Zimmer, Director of Communication for CMLA, and Ed Wallace, Executive Director of CMLA.

Discussion Points:
Treasury:  What do our community lender trade orgs want here?
CMLA: First, as we've long advocated, the GSEs need to hold substantial capital now.  Also, we want the GSEs to continue to evolve to utilities, with level pricing for all lenders, a capped ROE, and a payment for their federal backing.

Treasury: What about legislation here, including that proposed by the Senate Banking Chair?
CMLA: We don't think a complex redo of the US secondary makes sense.  In the most recent GSE policy hearing, in 2017, all six witnesses said more than 2 guarantors is not a wise policy choice; it creates additional regulatory burden for community lenders and does not add to overall safety and soundness.  Since then the Realtors have also adopted this view. Narrow legislation could move someday, but after Treasury and FHFA establish higher capital and identify utility-like policy and legislative recommendations to Congress.

Treasury: So how we can we achieve #1 above soon without legislation?
CMLA: Once they hold more capital, the GSEs should pay a commitment fee for their current backstops, as already authorized under the existing PSPA.  A consent decree embodied in a new PSPA amendment could establish level pricing and limits on ROE.

Treasury: What about a guarantee for MBS?
CMLA: We don't see Congress voting for this for several reasons.  One is that it would turbocharge the TBTF Bank balance sheets.

Treasury: How do you feel about some of the current proposals for GSE Reform?
CMLA: The current proposals suggesting multiple GSEs and Ginnie Mae as the backstop will not work in our opinion. As has been the case since 2012, we have advocated for Fannie and Freddie being moved to utilities with oversight which will allow them to continue to serve the market as they have, and which has proven to be a viable. As was with the last Senate testimony regarding GSEs in 2017, all witnesses agreed more than two GSEs will not be good for the market.

On the issue of allowing Ginnie Mae to be the backstop and sole securitizer is unattainable due to their lack of knowledge of the functionality of Fannie Mae and Freddie Mac, personnel issues, and outdated technology. We believe this would cause a major detrimental impact on the overall housing market.

Treasury: What else would you like to see here?
CMLA: We would like to see action very quickly on capital retention.   And we don't think the affordability provisions of the charter, including duty to serve and housing trust funds, should be degraded while in conservatorship.

In addition, action needs to be taken on the QM Patch and development of the necessary actions needed to ensure there will not be any disruption to the markets.

What Does It Take to Get an Investment Property Loan? The Do’s and Don’ts of Buying A Vacation Home Combat Rising Inflation on Your Debt with a Refinance Loan Programs and Grants to Help First-Time Home Buyers 7 Essential Home Buying Questions